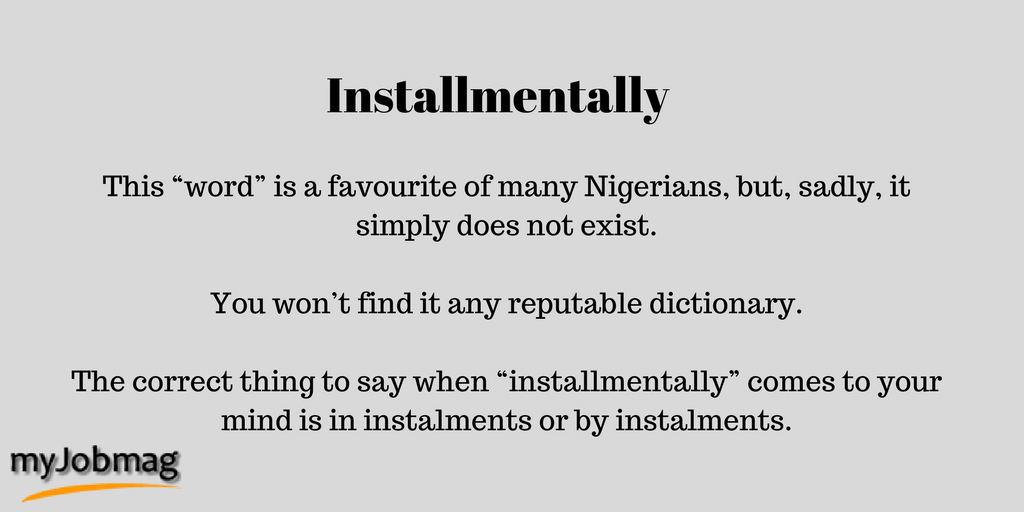 Here's a list of words that do not exist in the English Dictionary which Nigerians use on a daily basis without realizing that those actual words do not exist and even those that exist are not exactly what they think it means. Continue reading and educate yourself;

This “word” is a favourite of many Nigerians, but, sadly, it simply does not exist. You won’t find it any reputable dictionary. The correct thing to say when “installmentally” comes to your mind is in instalments or by instalments.

Nigerians use “plumpy” when they want to say that someone is chubby or slightly fat. The correct expression is plump.

This particular “word” is used severally on a daily basis, especially by Nigerian men when they intend saying that a woman has lost her virginity to a guy. The correct word to use, however, is deflower, because “disvirgin” is not a word.

This is a favourite of Nigerian politicians and political analysts alike. They use it when they want to say that a politician has dumped his political party for another party, usually a rival party. The right terms to use when describing this scenario are party switching, defection and crossing the floor and not “cross-carpeting” or “crosscarpeting.”

The word go-slow exists, but not in the way Nigerians use it. A “go-slow,” in the peculiarly Nigerian context, is a situation in which road traffic is very sluggish due to vehicle queues. However, go-slow in the English language actually means an industrial tactic used by employees whereby they intentionally reduce activity, productivity and efficiency in order to press home some demands. When this happens, you say that work in the office, factory or organization is at a go-slow. The correct terms to use when road traffic is very sluggish due to vehicle queues are traffic jam, traffic congestion, gridlock, and (less technically) hold-up, not “go-slow.”

“Cunny” is not found in authoritative dictionaries, but it can be found in some slang dictionaries. Over there, it is a slang used to refer to a woman’s v**ina. The correct term to use is cunning (which is used to describe someone that is being deceitful or crafty) and not “cunny.”

There is nothing like “opportuned” anywhere in the English language, but that has not stopped its blatant use by all and sundry in Nigeria, including journalists and writers. The correct word is opportune. The word opportune is an adjective; therefore it has no past tense. An adjective has no past tense. However, some verbs can function as adjectives or adverbs in a sentence. These verbs are called participles and they do have past tenses. They are not pure adjectives. Examples of participles are fattened, amused, disgusted, mystified, overwhelmed, upset and bored. Be that as it may, opportune is a pure adjective and not a participle, therefore it has no past tense. Opportune means appropriate or well-timed.

“Alright” is a misspelling of the term all right. All right is used when you want to say that something is adequate, acceptable, agreeable or suitable. To hardcore English language linguists, “alright” is not a word. However, its usage is gaining traction and it’s increasingly becoming acceptable. The Merriam-Webster Dictionary – which is considered the gold standard among American English speakers – has recently drawn a lot of criticisms for its permissiveness when it began indexing some otherwise colloquial and street language terms, including “alright.” Most linguists disagree with the gradual acceptance of “alright” as a word by the public and even the media, while those in the minority are “alright” with it.

“Wake-keeping” exists only in the imagination of a few English speakers. As a matter of fact, there is no such thing as “wake-keeping.” The correct word is wake and not even “wake-keep.” Both “wake-keeping” and “wake-keep” are ungrammatical.

This bad grammatical expression gained currency in Nigeria and neighbouring West African countries with the influx of made-in-China stylus pen touchscreen not-so-smart phones in the mid 2000s. It was a novelty then; many in Nigeria had not seen it – or even thought such advanced technology was possible – before. So, they looked for a name to call it and “screentouch” came to mind, after all you just touch the screen and it starts working. In case you’ve still not figured it out yet, the correct thing to say is touchscreen and not “screentouch.”