Nigeria’s unemployment rate  for the second quarter of 2020 rose to a record-high 27.1% in the newly released figures by the National Bureau of Statistics.

That is, 21,764,614 Nigerians are presently unemployed. This figure includes those that have experienced job loss, and those that have recently joined the labor force (recent graduates and former housewives/stay home husbands). The increase from the third quarter of 2018 grew by 4% from 23.1.

The rising unemployment rate is not unrelated to the COVID-19 pandemic that has impeded economic activities and the dwindling price of oil – the mainstay of the nation’s economy.

The table below shows a five-year comparison of the unemployment rate in Africa’s most populous nation. 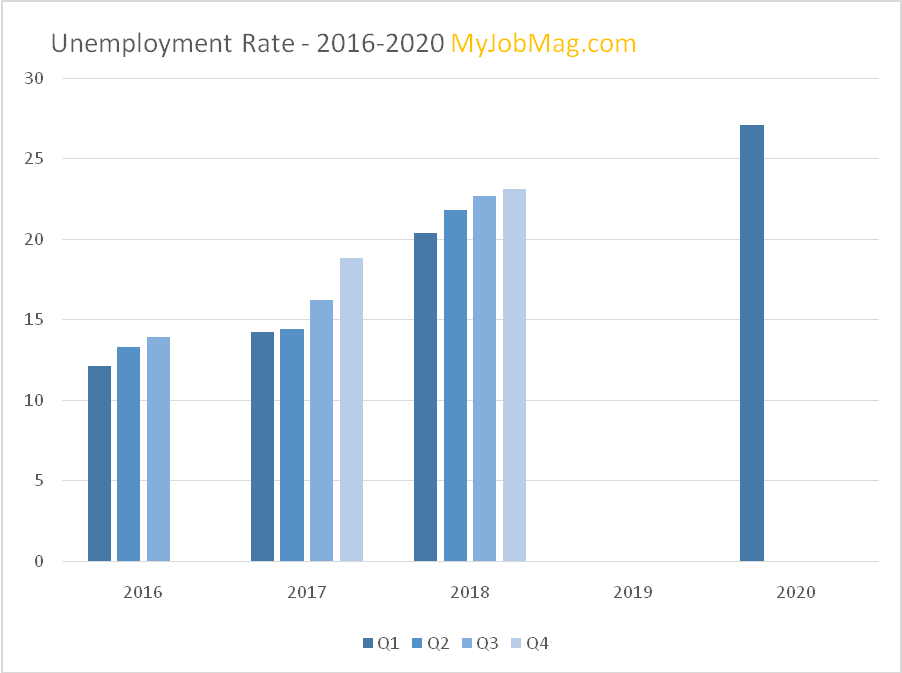 Understanding the unemployment statistics in Nigeria

#1: How many people are unemployed in Nigeria?

Currently, there are 21,764,614 unemployed people in Nigeria. For comparative purposes, the nation's population is over 200 million.

#2: What is the percentage of unemployed people?

The recently released information by the NBS caps Nigeria’s unemployment rate at 27.1%

#3: How many Nigerian youths are unemployed?

#4: How many Nigerian graduates are unemployed?

#5: What is the difference from last year?

#6: Where does Nigeria rank in the world?

Out of 181 countries with adequate unemployment data, Nigeria ranks as the 41st highest.

#7: How does Nigeria plan to solve its unemployment problems?

As was recently discussed the Federal Government announced a planned creation of 774,000 jobs some to curtail the rising rate of unemployment.

To register for our daily job alerts, click here.

This article was written and edited by a staff writer.
Share